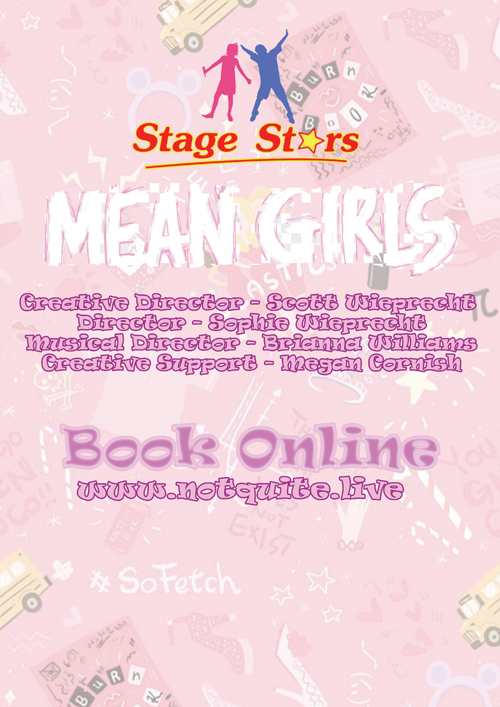 Janis Sarkisian and Damian Hubbard introduce the audience to Cady Heron, breaking the fourth wall and inviting them on their journey ("A Cautionary Tale"). Cady and her parents have moved to a Chicago suburb from Kenya, but Cady soon realizes that her high school classmates do not readily accept others who differ from them. Despite this, she is ready to accept the challenge of fitting in at the high school ("It Roars"), only for Cady to find that no one seems to like her or even acknowledge her ("It Roars (Reprise)"). Janis and Damian decide to help her as she tries to find her social group ("Where Do You Belong?"); describing the clique of high school social royalty dubbed "the Plastics" in particular. The trio consists of Regina George, the "Queen Bee"; Gretchen Wieners, Regina's nervous, eager-to-please second-in-command; and Karen Smith, the stereotypical dumb blonde. Regina and her fellow Plastics decide that the new girl will eat lunch with them for the rest of the week ("Meet the Plastics"). When Cady tells Damian and Janis about the invitation, the latter asks her to say yes to the Plastics and tell them everything they say. Damian tries to explain why they hate Regina, but Janis interrupts him.

In AP Calculus, Cady meets the dreamy Aaron Samuels and immediately falls for him ("Stupid with Love"). Kevin, head of the Mathletes, is impressed with Cady's performance in class and asks her to join them, but Gretchen warns Cady that joining the Mathletes is social suicide and Regina puts down Kevin to make him leave. Cady thinks Regina is nice for "protecting" her, but Janis warns her that Regina is dangerous. Amazed and intoxicated by her newfound power, however, Cady does not pay attention to Janis’s words ("Apex Predator"). At the mall, Gretchen asks Cady if she has met any boys she likes. When Cady tells her about Aaron, Gretchen becomes horrified because he is Regina's ex-boyfriend, which makes him off-limits to her friends. The Plastics and Cady retire to Regina's house, where they meet her "cool mom" and Gretchen and Karen show Cady their old Burn Book, where they put photos of their classmates and write mean comments about them. When they come across Janis' photo in the book, Gretchen explains that she and Regina used to be best friends. Regina claims Janis freaked out when she was unable to invite her to her thirteenth birthday party and ended up in art therapy. Later, Gretchen confides in Cady that, because of the state of her friendship with Regina, she has lost all confidence in herself ("What's Wrong With Me?").

The next day, Aaron discusses his previous relationship with Regina, how she made him feel like he was not himself, and that he has sworn off of dating. After an awkwardly concealed verbal slip-up results in him explaining a math problem to her, Cady believes that if she acts stupid, Aaron will help her with her work, and therefore talk to her more ("Stupid with Love (Reprise)"). After using this tactic, Aaron invites Cady to his Halloween party. Karen explains that in high school, Halloween revolves around looking sexy and having a hot costume ("Sexy"). Cady fails to realize this and shows up at the party in a "scary" costume, embarrassing herself. Later at the party, Gretchen tells Regina about Cady's crush on Aaron to get her approval. Spitefully, Regina decides to flirt with and manipulate Aaron until he agrees to get back together with her ("Someone Gets Hurt"). Cady sees Aaron kissing Regina and is devastated.

Furious, Cady shows up at Damian's house and tells him and Janis what happened. Damian tells Cady that the real reason Regina and Janis stopped being friends was because in 6th grade, Regina accused Janis of being a lesbian. When the latter was unable to deny it, her classmates bullied her until she left school. The three friends decide to work together to get revenge on Regina, starting with giving her Kälteen Bars to make her gain weight. They also trick Gretchen by sending a fake Candy Cane Gram to Cady from "Regina" saying that they are now best friends. This leads Gretchen to reveal Regina's secret hook-ups with football player Shane Oman, among other vengeful acts ("Revenge Party"). After the Plastics' disastrous "Rockin' Around the Pole" dance at the school talent show, people start noticing Regina's weight gain. Later, when she breaks one of the Plastics' arbitrary clothing rules, Cady stands up to her; banning her from sitting at their table. Everyone is relieved to be freed from Regina's rule ("Fearless"). Cady tries to apologize to Regina for kicking her out, but she insinuates that her reign is far from over ("Someone Gets Hurt (Reprise)").

Following winter break, Cady has undergone a complete makeover befitting of her new "Queen Bee" status leading Karen and Gretchen ("A Cautionary Tale (Reprise)"), though Damian and Janis disapprove of this. After Cady tells Janis that she cannot attend her art show because of a trip with her parents, Damian and the other girls of North Shore High School try to hamper Cady's ever-growing social obsessions and make her stop acting dumb for Aaron by telling her about their own negative past experiences with obsessive behavior ("Stop"). Gretchen and Karen convince Cady to lie to her parents and throw a "small" party while they are gone that weekend. Gretchen starts to notice similarities between her friendship with Regina and Cady while Mrs. George wonders why her daughter refuses to confide in her; reminiscing about the old days when Regina was a child. Concurrently, Gretchen contemplates being friends with Cady ("What's Wrong With Me? (Reprise)").

Following Gretchen and Karen's advice, Cady throws a party in an attempt to get Aaron to come over. However, she becomes intoxicated and crazier ("Whose House is This?"). When Aaron shows up, they sneak off to her bedroom, where Cady tells him the "funny" story about how she pretended that she was dumb to make him like her. Aaron becomes upset and says he liked the smart and kind Cady, not her new Plastic self ("More is Better"). He leaves, but she chases after him and runs into Janis and Damian outside, who have come to confront her after the art show. They tell Cady that she betrayed their trust, lied to them, and has gone full Plastic. Cady accuses Janis of being in love with her, just as Regina did years ago. Janis and Damian are disgusted by Cady's behavior, with the former throwing a picture she submitted to her art show at Cady; revealing that the winning painting was of the three of them ("Someone Gets Hurt (Reprise 2)").

When Regina discovers that she was not invited to Cady's party and that the Kälteen Bars were the cause of her weight gain, she decides to get revenge by releasing the Burn Book after adding "Regina is a Fugly Cow" to it in order to take the blame off of herself. She throws copies of the Burn Book pages all over the school, revealing the insults about everyone they know, except Karen, Gretchen and Cady ("World Burn"). All of the junior class girls begin fighting over the insults. Janis and Damian see an insult in the book that only Cady could have written about him. At a required assembly about the Burn Book, Ms. Norbury tries to bring the girls together. Janis explains her philosophy to the school, referencing her failed friendships with both Cady and Regina; empowering the girls to stand up for themselves ("I'd Rather Be Me"). When Regina storms out in anger and disbelief, Cady tries to apologize, but the former plastic gets distracted and hit by a passing school bus.

The accident prompts Cady to reevaluate herself and realize what a monster she has become. After learning Ms. Norbury was about to be fired due to the things she wrote, Cady takes full blame for the Burn Book, despite not having written the entire thing herself. She is suspended for three weeks and banned from the Spring Fling ("Fearless (Reprise)"). When Cady returns to school, Ms. Norbury offers her a way to earn extra credit and save her grade: joining the Mathletes at the state championships. The team wins, and Cady feels redeemed ("Do This Thing"). She then sneaks into the Spring Fling with Aaron's help after kissing him. There, she runs into Regina, and they have a heart-to-heart before making up.

Cady is elected Spring Fling Queen, but after noticing how fragile and cheap the plastic crown is, she breaks it into several pieces and gives them to each girl in attendance - telling them they are all "real, and rare". She apologizes to Janis and Damian, and they move forward as friends once more. Cady, Damian, Janis, Gretchen, Karen, Aaron, and Regina join together, finally accepting each other ("I See Stars").