ROBIN AND THE SHERWOOD HOODIES 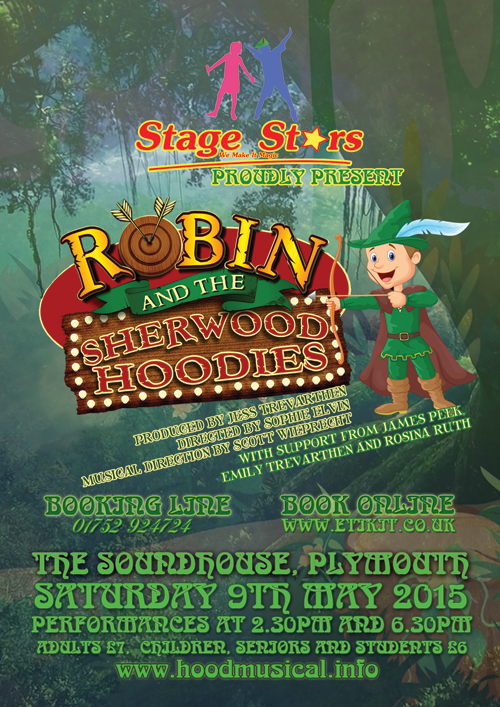 ROBIN AND THE SHERWOOD HOODIES - SYNOPSIS

In the prologue our moody, mysterious narrator Jack Spratt, Private Detective, introduces himself and explains how crime has swept through Happy Valley. Dramatic music begins as the stage suddenly becomes an exciting whirl of frantic activity with a police squad in hot pursuit of an unknown criminal. Two reporters bring us the latest news of crime on the streets whilst a crowd of anxious onlookers gather and begin to sing the opening song, "Once Upon A Crime!".

The song ends and we are transported to Jack Spratt’s office, where Jack calls the Police Chief about a recent case. Goldie Locks enters with a suitcase and, following a very comical set of misunderstandings, explains to Jack that she is in desperate need of his help. As she begins to tell Jack her story, a flashback transports us in space and time to the previous morning at The Dairy.

We discover the absent-minded Mother Hubbard who has once again lost her only cow, Marigold. Goldie enters and reminds Mother Hubbard that she is always losing things, such as her precious recipe book that went missing years ago. Simple Simon enters and he and Goldie unsuccessfully try to comfort Mother Hubbard. All are relieved when the local fairytale characters find and return the wandering cow to the dairy. Following a slapstick milking session, Tom-Tom arrives with a pig under his arm and the police in pursuit. Simon hides Tom-Tom just as the inept police squad enter. Pompous Inspector Drain interrogates the locals and with a little bribery discovers and arrests the innocent Tom-Tom.

Our two reporters return with live coverage of the reopening of The Porridge Pot Diner, Happy Valley’s finest restaurant. The staff and customers give a rousing reception to owner Papa Bear, his wife Mama Bear and their son Junior, and celebrate by singing "The Porridge Pot". Goldie enters and chats with her friend Junior, who expresses his frustration that although he wants to be an inventor, his father expects him to work in the "family business". The Bear family are interviewed by the reporter and the scene ends with a rousing reprise of "The Porridge Pot".

Jack Spratt then takes us to the Porridge Pot’s back room, where Papa Bear has a secret meeting with his half-witted henchmen, the Billy Goat brothers. It becomes clear that these furry felons are behind the recent crime wave, all part of Papa Bear’s evil plan to flatten Happy Valley, build a giant Porridge Factory and take over the world! He gives them a list of crimes to commit and people to frame, along with a suitcase of cash to pay the lumberjacks to flatten the forest. He also reveals his secret suitcase full of evil plans - and Mother Hubbard’s recipe book that he stole from her years ago which helped him build his restaurant and porridge empire.

Down at the Police Station, Inspector Drain is expressing his frustration over the recent crime wave and his squad’s lack of policing skills. PC Plod is more interested in his suitcase of nuts which he proudly displays to everyone. An emergency call informs them that Humpty has been involved in a horrific wall related incident. The action moves immediately to Hickory Hospital, where Humpty is operated upon by Doctor Foster and Nurse Polly in a brief but hilarious medical drama. We switch straight back to the Police Station where we learn that Humpty was pushed. Bo Peep enters to report stolen sheep, and a comical identity parade leads the police to arrest the wrong suspect. Peter Piper is questioned about stealing pickled peppers, and in the face of all this crime Inspector Drain tells his squad it is time to spring into action. The ensemble enter to sing the comedy action song "Boys In Blue".

The following cold and frosty morning at the Mulberry Bush, Jack is on the watch for suspicious activity. Sure enough, the Billy Goats enter having kidnapped Marigold the cow. Papa Bear enters for another secret meeting but is overheard by his son Junior, who is horrified to discover the truth behind the family business. The lumberjacks enter and, after displaying their tree-felling skills, are hired by the Billy Goats who tell them to collect a suitcase of cash from The Porridge Pot at midnight. Mother Hubbard and Simon are searching for missing Marigold when Goldie brings them the ransom note she has found and vows to pack her case and go searching for Marigold. Simon tells Mother Hubbard to be positive and he and the ensemble cheer her up with the song "It’s Up To You".

Later that evening we find a sad and reflective Junior Bear wondering how to deal with the truth about his father and why he cannot be who he wants to be. We also find Goldie who, too, dreams to be more than she is, and together they sing the touching duet "While The World Is Sleeping". At the end of the song, the two friends meet and tell each other everything. Junior hatches a plan and returns to The Porridge Pot whilst Goldie, suitcase in hand, goes to the office of Jack Spratt—and we suddenly find ourselves back at the very point where the story started. Goldie explains that Junior will leave his father’s suitcase of incriminating secret plans at the restaurant for them to discover, and she and Jack set off to save the day.

Back at the Porridge Pot, the bears’ evening porridge appears to be too hot to eat. Junior cleverly suggests they leave for a long, slow night time walk whilst it cools and as they leave he positions his father’s secret suitcase for Goldie to discover. During a fast paced farce-like scene, various groups of characters enter and leave the restaurant with other suitcases of clothes, cash and nuts, each getting mixed up with the others. In a faithful nod to the traditional tale, the three bowls of porridge are tasted, Junior’s chair is broken and Goldie is accidentally knocked unconscious, leaving her lying on the floor asleep and snoring loudly. When the bears return, they discover Goldie and call the police who arrive instantly to arrest her. However, the other groups enter one by one revealing the surprising contents of each suitcase. When the Billy Goats accidentally reveal the truth, Papa Bear denies all, but Junior finally finds his voice and courageously speaks up against his father. Mother Hubbard is reunited with her cow and recipe book and at last the police arrest the true criminal, Papa Bear. With a final word from Jack Spratt, the story is brought to a joyful conclusion as the ensemble sing the exciting finale song "Happy Ever After".